Ever tried to get your head around the Lv2 spec? Me too, and if one isn't used to the "lingo" of URI's, RDF's, and various other path etc it can all be a bit daunting. Yet some of the coolest and best plugins (check: this Parametric EQ, or this IR reverb) are on the Lv2 standard, so you really do want to support them...

If you wanna get your hands dirty, skip down to the bulletpoints, that's what you'll need to do to get started!

With this new library from David Robillard writing hosts to use these plugins should become easier & faster. The library I'm talking about here is of course Lilv. It depends on two of Robillards other libraries, namely Serd & Sord.

Serd handles the reading & writing of RDF data, as well as Turtle & NTriples. Don't worry, I don't know what they are either. Perhaps in the future I'll try understand them...
Sord is a library for storing RDF data in memory... apparently we'll need that!?

Getting Started:
Create a folder somewhere where's your gonna do all this stuff.

Ensure these are installed:
lv2core

This shouldn't give any problems, as we've just installed the 2 dependencies you probably didn't have. If JACK or any other common issues arise, just fix them.

Then this is what you do:
1. Direct your browser to http://lv2plug.in/spec/
2. Grab lv2core,lv2-event, and lv2-uri-map.
3. Untar lv2core, ./waf configure, ./waf, ./waf install it (the first one should be fixed now)
4. Run "lv2config", this creates some symlinks around to headers
5. Bop open a terminal, cd /usr/include/lv2/lv2plug.in/ns/
6. sudo mkdir ext
7. Copy the event folder into ext, and copy the uri-map folder in too.
8. *CHECK THE DIRECTORY STRUCTURE!!!* the output of ./waf configure tells you *exactly* where its looking for the files, *PUT THEM THERE*. Can't stress this enough. Use your brain & figure out what's not where its meant to be

Only if *building* fails, ie: ./waf fails like so:

Get to your favorite text editor, and sudo up the cow powers, because we've got a header to edit.
1. sudo

and then sudo ./waf install the whole thing.

Boom! You've got lilv running.
Check the lilv-0.4.0/utils directory for some examples of using the library.
If you've built lilv, then in /build/utils there are the binaries of the examples. Run them while looking at the source, understand what to do.

In the /bindings/python dir there are 2 files, lv2_list.py & lv2_apply.py
They might provide some insight into the steps nessiary to get Lv2 plugins instantiated and in a good mood to work... :D

Finally a huge thanks to all the members of LAD who have developed this awesome standard, awesome plugins, and last but not least, awesome hosts! :D
Cheers, -Harry
Posted by Harry van Haaren at 5:17 AM 6 comments: Links to this post

Today Luppp got a SoundStretch class, its based on the LGPL library SoundTouch, and provides independant time or pitch scaling. That's pretty awesome :) Bind yer MIDI controller, and you can control the pitch of your loop... for drums its great to get some extra Oomp outta the kick.

The BPMDetect interface from SoundTouch isn't being employed yet, but it won't be long. Also the loading of sample files will be transfered from Looper & Sampler to FileLoader. In there will be the BPM detector, and automatic scaling of BPM of loops to the current BPM, then pushing it into the ResourceHolder buffer.

Also news: wierd ported LADSPA plugins won't crash the system anymore, and the stereo plugins still work on the mono channels, just using the Left ins & outs. A LADSPA GUI has been worked on, just a small dial that displays the value of a controller, but it needs a good rework before its useable. 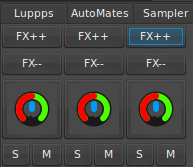 A LoadSaveBase class is in order, that will be the parent of any class instance that wants to save / load data between sessions. (That's just about every instance... :) All in the pipe!
Till next, -Harry

Edit: Almost forgot, it also sends MIDI CLOCK now, so you can sync your LFO's on external synths to JACK transport :D
Posted by Harry van Haaren at 5:35 AM No comments: Links to this post

Got some great news... there was a nasty stupid bug in the GUI redraw of the waveforms, (which I mistakenly though was due to threading) but it turns out the code was entering a loop with an increment that evaluated to zero... But its fixed now! :)

So with the GUI up and running one can see how far along the loops are, and what "amount" of the loop is going to be played.. ie "zooming" in on the part of the loop that's active.

Also the engine has been getting some attention during the Linux Audio Conference, held in Maynooth this year! This means that initial CSound support exists, so effects & instruments can be coded up in CSound to be played live as if its an internal synth / effects box. Lots of new possibilites now, and due to the csound .csd files being text based, they will be real easy to share & merge, allowing all users to contribue & share presets for effects with eachother.. :) 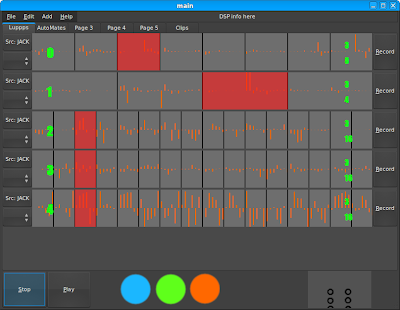 Till next! -Harry
Posted by Harry van Haaren at 3:52 AM No comments: Links to this post