Automate: Another stage along the way!

Recently been quite busy hence the lack of posts, but today there's been an improvement in Automate. It actually works! :-)

It's quite a simple program, you input a MIDI Channel and CC, click in an automation line, and its gonna keep on repeating that line in CC's. 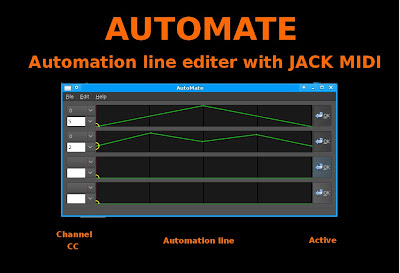 Currently you're to compile it yourself, but I'm looking into getting a PPA setup.
Ill keep yee up to date. :-)
-Harry

PS: This will be (publicly) announced & released eventually, for now it needs some reworking. (it sends its MIDI info every JACK frame, which is going to slow it down *a lot*.)
Posted by Harry van Haaren at 12:04 PM No comments: Links to this post