Over the last week I've been implementing ambisonic support in Luppp. It didn't add up to too much work, only that JACK ports had to be named differently, the signal path adjusted somewhat (1 input, 3 outputs rather than 2 ins ,2 outs.

At the moment 2D horizontal B-Format ambisonic is supported, but implementing the 3D dimension of the first order wouldn't be too much work.. (add another channel to the process() functions.. )

The pan widget got a little haul over just to support 2D's rather than the one...


Till next, -Harry
Posted by Harry van Haaren at 11:37 AM No comments: Links to this post

Productivity of today: Automation. Although the widget was already done, and the hard code in place, making it actually effect the parameters in the engine was a little tricky. It now communicates with itself internally (rather than the CPU expensive OSC beforehand). I've had lots of automation tracks running concurrently and there's no problems with performance that I can see. :-) 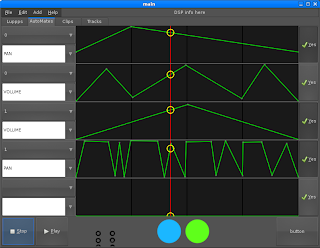 Here we have a couple of lines, unfortunaly I didn't record the output of Luppp while it was playing the lines, would have been nice... 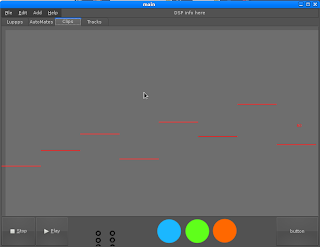 Also created in the last weeks, a primitive MIDI editor... Clicky in notes, the engine plays them back (sample accurate... :-)

Currently not much can be done bar insert & clear notes. But with a bit of time that will all change...

Bottom left of the screenshots there's a "Stop" & "Play" button, which make jack transport start / stop. Useful to not have to switch to QJackCtl everytime.

Till next, -Harry
Posted by Harry van Haaren at 11:24 AM No comments: Links to this post

Today a "ResourceHolder" was implemented, it takes all buffers / MIDI / automation data, and stores it. Nothing else. But it means there's a centralized place from which both the GUI & the engine can access the data, and allows much easier plotting of data on screen... See attached:

All in all... happy that this got done, no clean solution came to mind since the last update, so its had been while in the pipeline.
Till next, -Harry
Posted by Harry van Haaren at 3:20 PM No comments: Links to this post